A mixture is a blend of two or more entities that have formed a separate entity altogether. This topic usually goes along with alligations as the concepts of both complement each other. It’s a significant part of the syllabus of the GMAT. It generally comes in the form of problem-solving questions and the difficulty level is usually between medium and hard.

The concepts of mixtures and alligations are closely related as their principles correlate with each other. A mixture is a combination of two or more entities of different prices mixed in different amounts to create a new entity, and alligation is the means of determining in what ratio these entities can be mixed to produce a mixture of the desired price. We refer to the cost price of a unit quantity of such a mixture as its Mean Price.

The basic formula to deduce the ratio in which the entities are mixed is called the rule of allegation.

To simplify the solution, the rule of alligation is also represented as 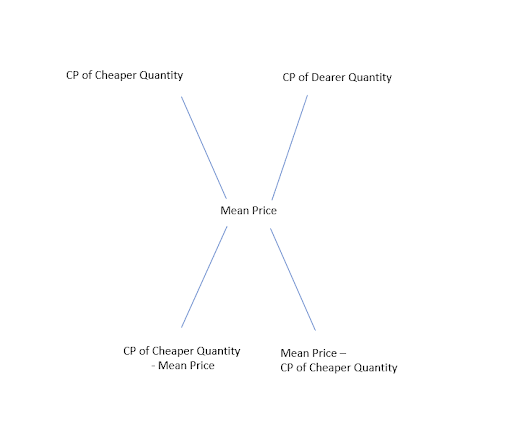 The process of replacing a certain amount of a liquid with some other kind of liquid (usually water or oil) repeatedly to render the solution pure is called repeated dilution. This helps in determining the quantity of the pure solution left after ‘n’ numbers of replacements are done.

Let’s understand this with the help of an example. Let’s consider a vessel that contains ‘x’ units of petrol from which ‘y’ units are replaced by water. This process is continued for ‘n’ number of times until the desired solution is obtained. Therefore, the quantity of the resultant mixture will be calculated by using the following formula:

The major types of questions one can face while solving mixtures and alligations are:

The quantity(or the ratio of quantities) and price of the entities will be given and the average price of the resulting mixture will be asked.

Solution – Let the quantities of two varieties be 2x and 3x respectively and let the mean price be y.

By using the formula

Therefore, the mean price of the superior solution is Rs. 42 per litre.

A shopkeeper tries to sell a mixture of two kinds of grains for Rs. 20 per kg. The cost of the first variety of grains is Rs.10 per kg and the other is Rs. 25 per kg. What should be the ratio in which both kinds of grains are mixed to obtain this selling price?

Solution – By using the formula