Pros and Cons of Retaking the GMAT 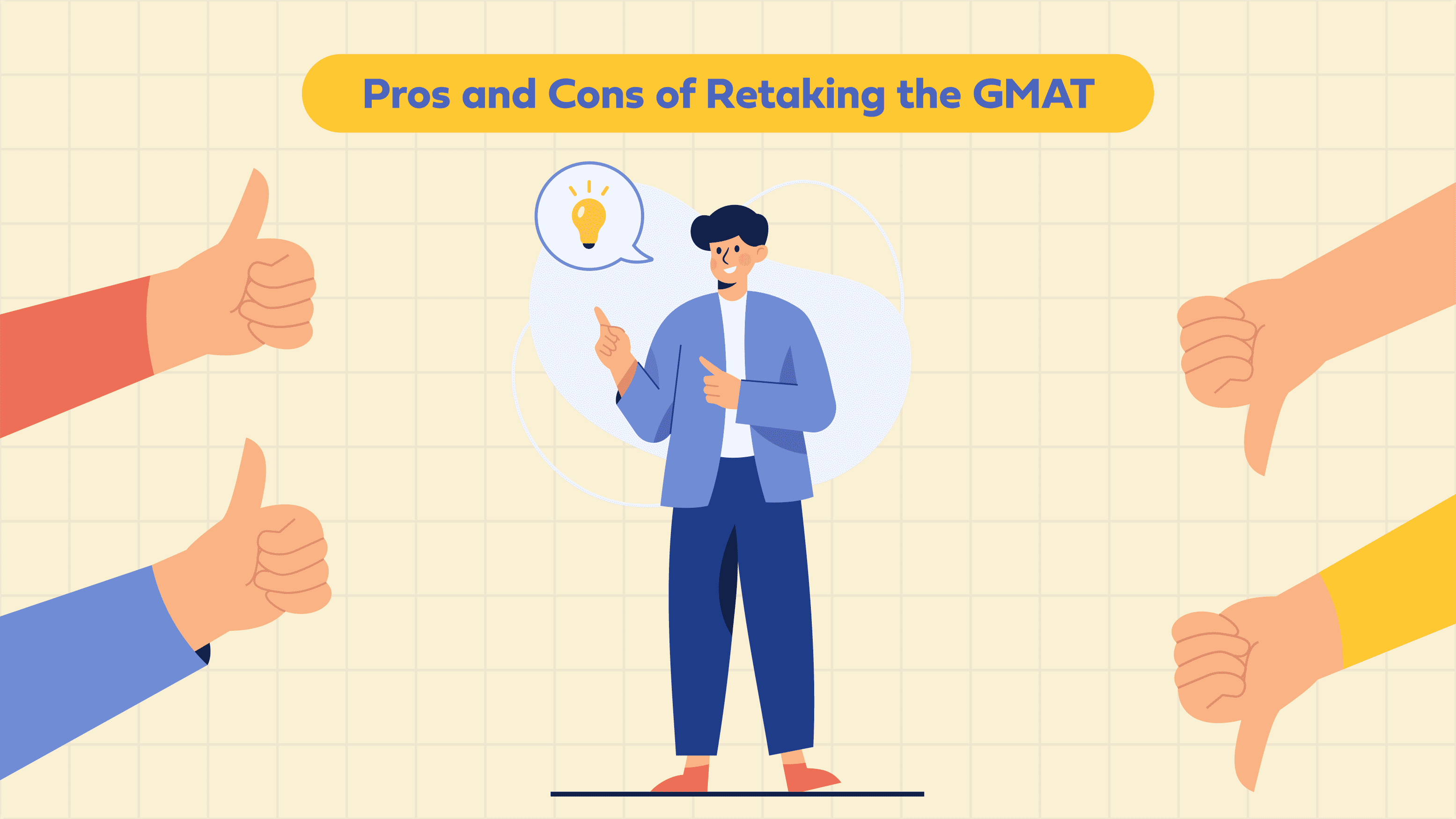 The Graduate Management Admission Test (GMAT) is a standardised computer-adaptive test for admission into a post-graduate program like a Masters in Management or an MBA. This exam tests a candidate’s logical reasoning, analytical writing, critical thinking and problem solving skills. The test is administered by the Graduate Management Admission Council (GMAC) and can be taken multiple times in a year. The score range for the GMAT exam is 200-800 and most B-Schools insist on a good GMAT score for admission purposes. The score for the GMAT exam is valid for five years. More than 7,000 programs at nearly 2,300 graduate business schools accept GMAT scores worldwide.

You are allowed to access your unofficial GMAT score immediately after the exam is over. You have the option to either accept or cancel scores within two minutes. If you accept the scores, then your scores (official) will be sent to the universities you have selected. In a scenario where you feel that you have not performed well,  then you can consider retaking the GMAT to increase your chances of obtaining a better score. However, if you wish to retake the GMAT, you need to conduct an in-depth research and plan in advance, as the GMAT preparation process can be rather arduous.

Before we weigh the pros and cons of retaking the GMAT, let us take a look at the recent changes in the GMAC policy.

Initially, test-takers could opt to automatically report the scores to the universities of their choice but this they had to do before they knew their unofficial scores (had to be done before the exam). This was very risky as test-takers had no clue if they would be turning in a satisfactory or unsatisfactory score. However, in the year 2014, GMAC made a change in this exam policy. Candidates could accept or reject scores after they saw their unofficial scores after the exam.

Another change in the GMAC policy is that now you can retake the GMAT after a gap of at least 16 days from your previous attempt. Initially, candidates had to wait for a minimum of 31 days before retaking the test. The new policy has made it easier to schedule another test if you have tight deadlines for your university applications.

Things to Keep in Mind When Considering Retaking the GMAT

Now, let us consider a scenario, where you are not happy with your GMAT score. If you are considering retaking the GMAT, you should be aware that the GMAC lets you take the GMAT five times a year. You should consider the GMAT only if you are dedicated to improving your GMAT score. In addition, you need to make sure you have enough time, energy, and funds to be able to take the GMAT again.  Since you have taken the test once already, you can now identify where you went wrong and work on those areas.

If you have decided on retaking the GMAT, there are a couple of things you should keep in mind. To begin with, you need to include more practice tests in your study regime. This will help you work on the sections you are struggling with. Besides, you need to be thorough with the fundamental concepts. While taking the practice tests, make sure to attempt advanced questions as well. This will help you tackle the computer-adaptive nature of the GMAT. The best way to score high in the GMAT exam is to prepare vigorously and take adequate practice tests. Finally, you must be committed to improving your GMAT scores so that you don’t regret investing your time, energy, and funds later.

Pros of Retaking the GMAT

Cons of Retaking the GMAT Exam

We have listed the pros and cons of retaking the GMAT and we hope it helped. As you can see, the pros of retaking the GMAT exam have outnumbered its cons. However, if you are truly interested in retaking the exam, try to schedule the exam according to your convenience and prepare thoroughly for the exam. And, since you do not want to go wrong with your second attempt as well, it is advisable to reach out to an online coaching service, such as CareerLabs for assistance.