Home » List of US Colleges » University of Massachusetts, Amherst 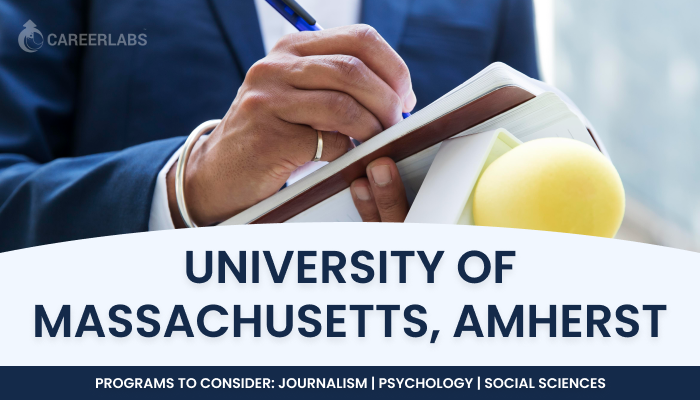 In 1962, UMass Medical School in Worcester was founded, followed by UMass Boston in 1964, creating a multi-campus system for the university. Since then, the institution has achieved several landmarks, such as the establishment of the UMass Law School–the only public law school in Massachusetts–in 2010. Thus, UMass has eventually transformed into a regional academic powerhouse that educates up to 75,000 students annually, a remarkable contrast to its humble origins as a small land-grant college with 56 students.

In this article, we will discuss the programs offered by UMass Amherst, its admission process, fee structure, and the financial aid provided by the university to its students. So read on!

The University of Massachusetts, Amherst, offers over 110 undergraduate majors and 127 graduate programs. These courses cover multiple fields of study; some are mentioned below:

The various courses at UMass Amherst are provided through its 12 colleges:

The university is known for its research programs and projects. In the year 2021, it spent around 287 million dollars on research and development. Aptly, it is classified among the R1: Doctoral Universities in the Carnegie Classification of Institutions of Higher Education. This classification is granted only to colleges and universities that consistently conduct research on different subjects and allocate a significant amount of their resources to research activities.

Over 25,000 undergraduates and 7,500 graduate students attend classes at UMass Amherst every year. They are taught by over 1,400 faculty; the student-faculty ratio stands at 20:1. The faculty at the university consists of 16 Guggenheim Fellowship Recipients and 25 National Endowment for the Humanities Grant Recipients. UMass Amherst’s faculty also includes five members, each from the National Academy of Sciences and National Academy of Engineering.

UMass Amherst’s campus is a sprawling one: 1,450 acres in size. From the Campus Center, the campus extends about 1.6 km in all directions. It houses a variety of artistic venues for both performance and visual art, one of which is the Fine Arts Centre (FAC). Throughout the year, the FAC presents nationally acclaimed theatre, music, and dance productions in its performance spaces–Concert Hall, Bezanson Recital Hall, and Bowker Auditorium.

UMass is also a member of Division I of the National Collegiate Athletic Association (NCAA), a nonprofit organization that regulates student athletics among about 1,100 American, Canadian, and Puerto Rican schools. The students at this university participate in several sports, such as baseball, basketball, ice hockey, football, soccer, and swimming, among others. The UMass football team has enjoyed success over the years and has won 17 Yankee Conference Championships (a collegiate sports conference in the eastern US).

The admission process at UMass Amherst largely depends on the program that you choose to pursue. Since each course requires a specific set of skills, the admission prerequisites for all courses differ. However, we have listed below the eligibility criteria that are common for all the programs.

The eligibility requirements specific to each course are available on the official website of the University of Massachusetts, Amherst. You can visit the website to learn more about the admission prerequisites of your chosen program.

The table below illustrates the cost of attendance for students pursuing undergraduate and postgraduate programs:

UMass Amherst helps students finance their education through financial aid programs such as scholarships, grants, work-study, and many more. A few scholarships provided by the university are listed below:

So if you aspire to study at an institution that brings out a researcher in you, then the University of Massachusetts, Amherst is the place to be. We hope that this article has provided you with all the information that you require to apply to this university. All the best!