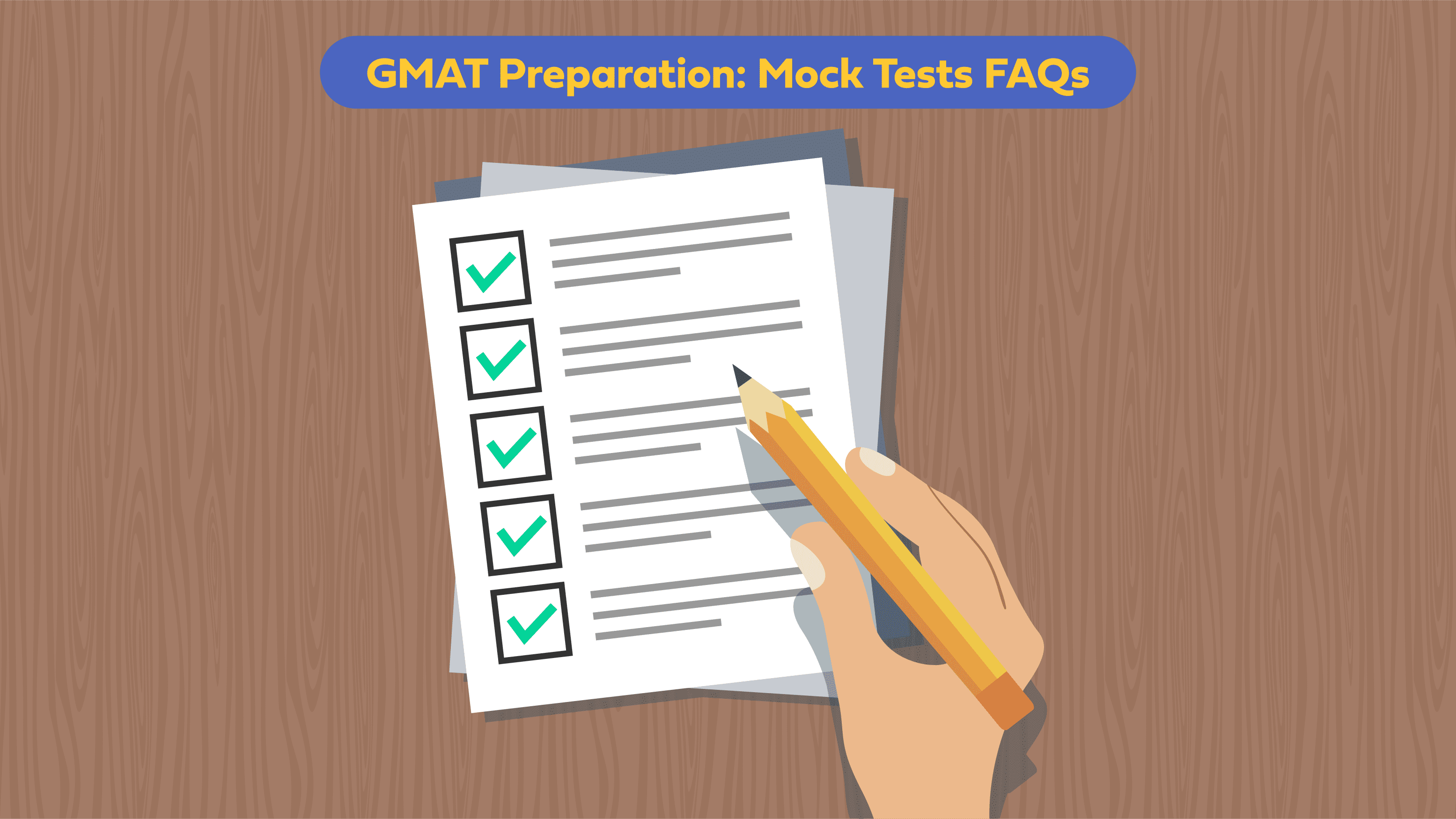 Are you not aware of how helpful GMAT mock tests are? Do you not know when to take these tests and why? If you have such questions on your mind, then here are some GMAT preparation mock test FAQs for your knowledge.

Taking mock tests is considered an important aspect of the GMAT preparation process. While some might know how to make the best use of GMAT mock tests, a majority of GMAT test-takers are often contemplating whether they should take the mock test or not and are unsure how to proceed with it. So, let’s take a look at some GMAT mock tests FAQs to understand why these tests are important for your GMAT prep.

The frequently asked questions with regards to the GMAT mock tests are as follows:

Q: Do I have to take a mock test? Why can’t I just solve sample questions before I write the real GMAT?

The answer to this question is a straight no! You must take at least a couple of mock tests before writing the actual GMAT because it will acquaint you with the exam pattern and give you a glimpse of how the GMAT is conducted. You will also get accustomed to the exam and will know how to tackle a four-hour-long exam.

If you think you can take the test without appearing for mock tests beforehand, then you’re setting yourself up for some deep trouble on the day of the test. While you would have practised sample questions from each of the GMAT, you may still be unfamiliar with how the exam takes place. When you take a mock test, you become familiar with the computer-adaptive testing techniques, break patterns, duration of each section of the exam, marks allotted for every section, etc. Hence, it is highly recommended that you take a couple of mock tests before your actual GMAT test.

Q: What are the benefits of taking a mock test? Why should I take one?

Let’s say, you are planning to go on a trip to Delhi. Is it enough for you to decide where you are going? Absolutely not! You need to figure out the logistics, budget, mode of transport, accommodation, and so much more. Similarly, a mock test helps you in navigating the various aspects of the GMAT and helps you plan productively. To start with, mock tests indicate where you stand in the preparation process, and lets you know how much time and effort you should invest to achieve your target.

It also helps in predicting your score to a great extent. The scores of the official mock test indicate the approximate score range you might end up with when you appear for the actual GMAT. However, it is important to note that the mock test scores and the actual GMAT score might not always tally or correspond with each other. Hence, it is recommended that you lay more emphasis on your preparation than on the scores you receive in the mock tests

Q: I seem to have learnt all the concepts. Can I take a couple of mock tests right before the exam and proceed to attempt the actual GMAT?

Taking a mock test is like using a thermometer. Using a thermometer will only measure and indicate your body temperature. It does not help in lowering your body temperature. Similarly, taking a mock test will only indicate your weaker areas. Taking mock tests alone does not magically increase your scores. Mock exams may help you understand question patterns, but it does not assist you in learning the subjects in a detailed manner. However, practising the fundamental concepts you have learnt by applying them in the mock tests while working on your weaker areas simultaneously will guarantee you a good GMAT score. While you might feel like you are well versed with all the concepts, attempting mock tests is not sufficient. You must draft a productive study plan, so that you don’t miss out on any topics from the GMAT syllabus.

Q: How many mock tests should I take during my preparation process?

Preparation for the GMAT is qualitative and thus, can never be quantified. The preparation process differs from person to person. If the candidate is confident enough, they will attempt as many mock tests as possible and if the candidate is not confident, they will limit the number of mock tests they take. Hence, there cannot be a definitive answer to this question. However, you can determine when to stop taking mock tests and write the actual GMAT. If you achieve your target score three times in a row while taking the mock tests, this is an indication that you can stop taking mocks and attempt the actual GMAT. Once again it is necessary to keep in mind that mock tests will only provide you with an estimate of the final score which you may end up with.

Q: How frequently should I take the mock tests?

Most website blogs would suggest that you take one mock test per week. However, you will only overwhelm yourself in the process of taking a mock test every week. Besides, there is no point in taking a mock test during the initial days of your preparation as you are not familiar with exam patterns or question types. You will only be setting up yourself for disappointment. Hence, mock tests should be taken after significant improvement and preparation or after having covered the GMAT syllabus. The mock tests should be taken within a moderate frequency.

Q: How should I space out the mock tests I take during my preparation process?

Ideally, 4 to 5 mock tests are more than enough to prepare well for the GMAT. Do not go overboard while taking mock tests as this might leave you feeling overwhelmed and might even hinder your performance. We would recommend you take your first test before you start preparing. You should take the second test after you have learned the fundamental concepts and have attempted the sample questions from each of the GMAT sections. The third mock test can be taken after you have identified your weak areas in the first two tests and have rectified your errors. The fourth and fifth tests can be taken a week apart while simultaneously solving advanced questions till you achieve your target score.

Q: I am planning on writing the GMAT, can you suggest what website I can use to download the mock tests from? Which one would you recommend?

The GMAT is a highly standardised, computer-adaptive exam. This means each question is more difficult than the previous one you have attempted. The GMAT uses a unique algorithm to grade each section based on their varying levels of difficulty. The algorithm has not been deciphered by anyone till date. Hence, we would recommend taking the mock tests that are viable on the official GMAT website (mba.com). They are all worth buying because they are by the makers of the test and thus, are close to the actual GMAT in every way possible.

You can also find numerous sectional practice tests and advanced questions available on the official GMAT website. When there is sufficient official material, what more do you want? You can pick and choose from the official material available. Since these mock tests have a similar exam pattern as the actual GMAT test, you can become well-versed and adept at the types of questions that are likely to occur in the exam.

We have tried to answer all the GMAT mock tests FAQs to the best of our knowledge. We hope it helped clarify all your queries regarding mock tests and how to use them effectively. Now, all you need to do is prepare well and ace the GMAT.